Deb and I were sat on a sofa in a holiday cottage on the outskirts of Fort William, looking longingly through the front window at a grey nothingness where Ben Nevis was supposed to be and wondering if the rain would ever stop. The monotony of our view was frequently interrupted by a steady flow of walkers, all hunkered down against the weather and all heading in the same direction.

Doune bothy next to Loch Lomond

“The West Highland Way comes past here on its way to the finish in town.” I replied sagely, vaguely recalling something I’d read somewhere once.

The West Highland Way wasn’t mentioned again until some weeks later, now back at home in the relatively balmy West Midlands.

“96 miles” piped up a voice from behind a laptop screen.

“The West Highland Way – 96 miles from Milngavie near Glasgow to Fort William.”

“Oh, right. You wanna do it then?” I asked, only half seriously.

Deb’s response came as a bit of a surprise. We were both experienced hill walkers but had never taken on a long distance path together. Deb also had an aversion to any activity involving tents, so I was doubly surprised when she suggested we camp along the way…

Fast forward to September this year and we’re at the Premier Inn in Milngavie. It’s still raining. Our West Highland Way adventure begins in the morning.

To say we’d planned our trip meticulously is perhaps stretching the truth a little: Deb had bought a new rucksack in a rather fetching blue; I’d dragged my old expedition sack out from where it had been kicked in disgust following an ill-fated Cotswold Way attempt in 1993 and we’d made a kit checklist. On a spreadsheet. We’d even bought a guide book, which we fully intended to read at some point (and still do).

This may sound like we were unprepared, predestined to be extracted from Rannoch Moor by helicopter, tired, emotional and low on jelly babies, but the reality was quite the opposite. We were fit, well equipped and well-practiced in the requisite skills of walking, eating and sleeping. We’d taken a fortnight off work to allow for a flexible approach, deciding on an arbitrary 7 day schedule, give or take.

Carrying a tent meant we were free from the constraints of pre-booked accommodation, baggage transfers and other such modern (in)conveniences. We’d planned a few days in Fort William after the walk and intended to nip up Ben Nevis while there. We figured that the summit of the UK’s highest mountain was a more fitting finale to the West Highland Way than the official finish, a bench outside Wetherspoons.

After relieving the Premier Inn of most of its bacon, we shouldered our packs and stumbled out into the crisp morning air. The sun was out. We picked up the start of the West Highland Way in Milngavie and followed it out of town through the tree-lined paths of Mugdock Country Park. Trees were soon replaced by farmland and scrub under the shadow of the Campsie Fells.

We made good time, reaching the outskirts of Drymen around noon, just before the first shower of the day hit. Frequent bursts of rain, we were soon to realise, would become a prominent feature of our journey. We continued over the flanks of Conic Hill, diverting briefly to take in the views from the summit.

This 361 metre eminence lies on the Highland Boundary Fault, the geological divide between lowland Scotland and The Highlands. The views over Loch Lomond are quite spectacular. By now the showers were turning heavy so we descended quickly through woods to the village of Balmaha and continued a few miles alongside Loch Lomond to the Milarrochy campsite.

We were glad of the site’s warm, dry “backpackers’ kitchen” after our first day of 21 miles. We dined in the company of fellow wayfarers before retiring to our tent to be lulled to sleep by the gentle spackle of rain against nylon.

We awoke early and felt surprisingly refreshed and ache-free. We were soon on our way again, following the undulating path along the tree-lined shore of Loch Lomond. Beyond the hamlet of Rowardennan the Way runs sandwiched between Loch Lomond and the steep slopes of Ben Lomond.

This is reputedly the most difficult section of the entire route and sure enough, the good paths we had been following so far soon degenerated into a rocky, rooty trail that wound its way around small crags and giant boulders. Our pace slowed, so it was with some relief that we eventually reached Inversnaid, 13 miles later.

We headed away from the Way here, uphill to the Inversnaid Bunkhouse, a converted church. We camped on the lawn out front and ate in the rather wonderful upstairs bistro. For a bit of variety, the overnight rain was now joined by gale force winds.

We continued the next day for several more long miles over rocks and roots, in sunshine and showers before eventually reaching the end of Loch Lomond and a return to good paths. We now ambled along the flanks of wide Glen Falloch, surrounded by hills.

At Inverarnan we discovered a culinary highlight: baked potato with haggis, washed down with a pint of Irn Bru – truly the lunch of champions. All the time now the scenery was changing, becoming more rugged, more magnificent. We passed by the town of Crianlarich (generally accepted as the half-way point of the WHW) and plunged into dense, damp conifer woods, alive with all manner of colourful fungi.

Emerging from the trees some time later, we approached our day’s destination, the Strathfillan campsite in Auchtertyre. Our arrival coincided with a heavy downpour so we bagged a wooden ‘wigwam’ for the night and slept like logs.

We stayed put in our wigwam until the rain eased off the next morning then set off the short distance to Tyndrum – a busy tourist stop on the A82. The noise and bustle was quite the novelty.

Beyond Tyndrum the path rose to a pass and the section that followed was a delight; downhill on a good track all the way to Bridge of Orchy, with the rugged cone of Beinn Dorain standing guard all the way.

Approaching Bridge of Orchy the heavens opened once more. Deciding we were due a short day, we scurried, dripping and muddy, into the opulent Bridge of Orchy Hotel and booked a room.

That evening we enjoyed the luxury of a comfy bed, TV, wi-fi and hot shower, while the tent lay sprawled across the room, steaming away merrily as it dried.

The next day, we strode out onto Rannoch Moor under leaden skies. Bounded on the west by the immense ridges and corries of the Black Mount, our eastward view stretched far over a vast wilderness to the unmistakeable peak of Schiehallion.

Rannoch Moor is big, and the morning spent crossing its western edge was one of the highlights of our walk. Leaving it behind, we headed round into Glencoe, pressing on past the immense, craggy frontage of Buachaille Etive Mor and up the Devil’s Staircase – a rather imposing name for a rather straightforward plod up to a ridge.

It was here that we began perhaps our least favourite part of the entire journey – the eternal descent to Kinlochleven. Not even the spectacular views of the Blackwater Reservoir and the Mamores ridge could make up for the endless track that seemed to be doing whatever it could to avoid its inevitable arrival in Kinlochleven. And it was raining again. Heavily. The onset of Storm Ali apparently.

We eventually reached the town to find it taken over by an ultra-running event. Suffice to say, camping pitches were both in short supply and rather water-logged. Luckily we managed to bag a night in someone’s caravan and availed ourselves of the local chip shop while the storm blew through.

Our last day on the Way, and one day ahead of schedule, was once again punctuated by frequent, heavy showers. We climbed out of Kinlochleven and into the pass of the Lairig Mor. This was a wonderful place; a rugged and atmospheric valley in the shadow of the misty Mamores.

It was also very wet and I couldn’t help thinking a canoe would be useful as we squelched our way down the Track That Thought It Was a Stream towards the Nevis Forest.

Thoughts of canoes soon turned to taxis as we finally hit the road and endured the two mile trudge to the finish line. We reached the bench outside Wetherspoons and sat a while, tired but happy.

A short time later we were sat, once again, on a sofa in a holiday cottage on the outskirts of Fort William, looking longingly through the front window at a grey nothingness where Ben Nevis was supposed to be and wondering if the rain would ever stop.

The following day it did (sort of) and we finished our West Highland Way atop the highest point in the UK, in the first snow of the year. A fitting end to a fantastic walk. We miss it – the scenery, the walking, the friendliness of everyone we met and re-met along the way, the steady stream of Irn Bru, the crazy Canadians, the teleporting hipsters (long story), even the rain…

Deb and Julian used their walk to support the National Osteoporosis Society, raising over £800 for this very worthwhile charity. They would like to say a big thank you to everyone who sponsored them. 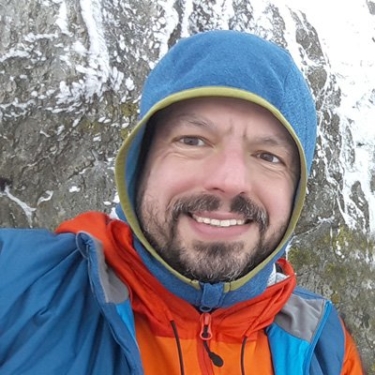 Julian is a mountain leader from Wolverhampton who loves hill walking and nature. He occasionally can be found on a mountain bike. He enjoys taking photographs and writing about his adventures.